This repo is a fork of Niklas Fauths Hoverboard Hack Firmware for some of the newer (V5.1) mainboards with the AT32F413RCT7 controller.

The code was compiled with GNU arm-none-eabi-gcc 7.3.1 under windows and should be compilable with other versions of the arm-gcc.

To build, clone this repository and run make:

Only boards with the AT32F413RCT7 controller are supported. Use https://github.com/cloidnerux/hoverboard-firmware-hack if you need support for boards that use the AT32F403RCT6 or STM32F103 controller. 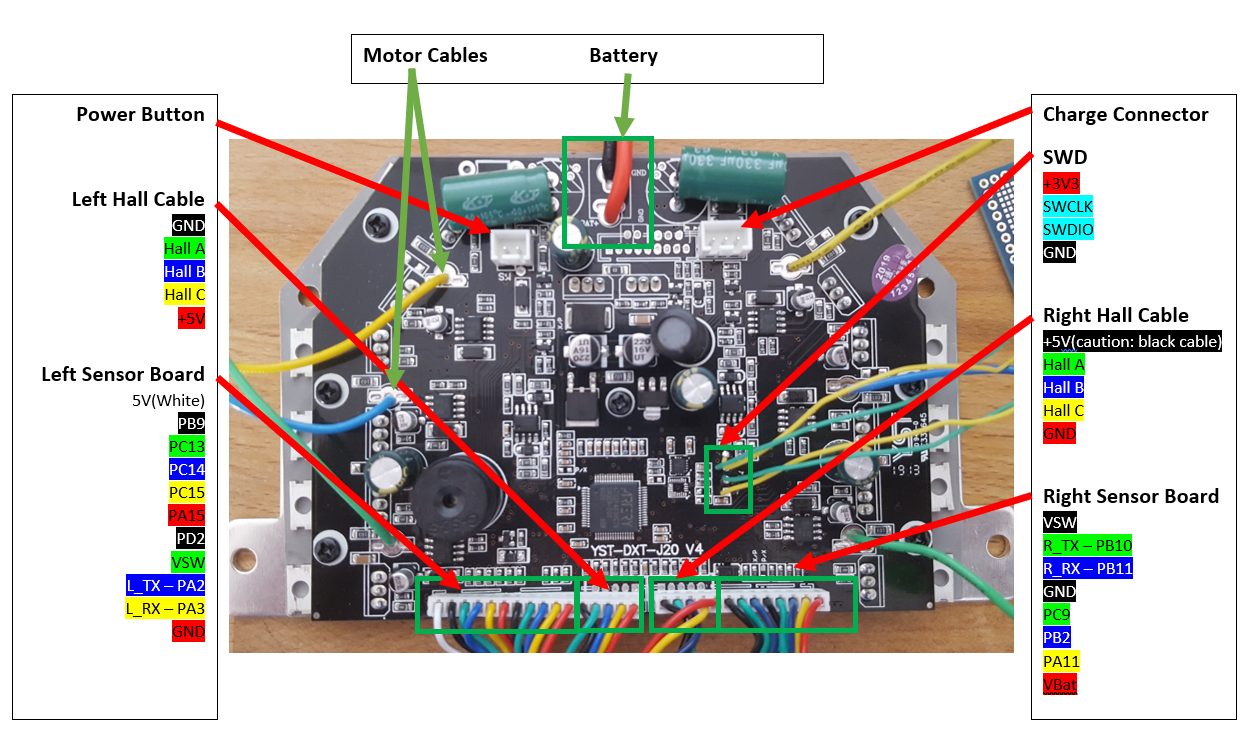 The above image is a V4 board, however, the V5.1 looks very similar. The main difference of the V5.1 board compared to V4 is the use of a cheaper controller and also (somehow) even less capacitors. All the pinouts for the connectors on the V5.1 mainboard are identical to the V4 mainboard.

These boards see a lot of small changes over the years to make them cheaper or to implement certain functions. Your board might not be quite the same as the board shown here.

The reverse-engineered schematics of an older version of the mainboard can be found here: http://vocke.tv/lib/exe/fetch.php?media=20150722_hoverboard_sch.pdf

To build the firmware, just type "make". Make sure you have specified your gcc-arm-none-eabi binary location in the Makefile ("PREFIX = ...") (version 7 works, there is a version that does not!) (if the ons in linux repos do not work, use the official version: https://developer.arm.com/open-source/gnu-toolchain/gnu-rm/downloads). Right to the STM32, there is a debugging header with 3V3, SWCLK, SWDIO and GND (pin 1). Connect GND, SWDIO and SWCLK to your SWD programmer, like the ST-Link found on many STM devboards.

Do not power the mainboard from the 3.3V of your programmer! This has already killed multiple mainboards.

Make sure you hold the powerbutton or connect a jumper to the power button pins while flashing the firmware, as the controller might release the power latch and switches itself off during flashing. Battery > 36V have to be connected while flashing.

I flashed my AT32 with a ST-Link using the SWD connector.

If you never flashed your mainboard before, the STM is probably locked. To unlock the flash, use the following OpenOCD command:

To program, use the following OpenOCD command:

If using OpenOCD, you will probably encounter a problem with it not recognizing the AT32 as a STM32 ("Cannot identify target as a STM32 family"). You will need to modify and compile OpenOCD, like in https://github.com/bipropellant/bipropellant-hoverboard-firmware/issues/67#issuecomment-516657520, however:

First, check that power is connected and voltage is >36V while flashing. If the board draws more than 100mA in idle, it's probably broken.

If the motors do something, but don't rotate smooth and quietly, try to use an alternative phase mapping. Usually, color-correct mapping (blue to blue, green to green, yellow to yellow) works fine. However, some hoverboards have a different layout then others, and this might be the reason your motor isn't spinning.

Nunchuck not working: Use the right one of the 2 types of nunchucks. Use i2c pullups.

Nunchuck or PPM working bad: The i2c bus and PPM signal are very sensitive to emv distortions of the motor controller. They get stronger the faster you are. Keep cables short, use shielded cable, use ferrits, stabilize voltage in nunchuck or reviever, add i2c pullups. To many errors leads to very high accelerations which triggers the protection board within the battery to shut everything down.

Most robust way for input is to use the ADC and potis. It works well even on 1m unshielded cable. Solder ~100k Ohm resistors between ADC-inputs and gnd directly on the mainboard. Use potis as pullups to 3.3V.

Have a look at the config.h in the Inc directory. That's where you configure to firmware to match your project. Currently supported: Wii Nunchuck, analog potentiometer and PPM-Sum signal from a RC remote. A good example of control via UART, eg. from an Arduino or raspberryPi, can be found here: https://github.com/p-h-a-i-l/hoverboard-firmware-hack

If you need additional features like a boost button, have a look at the while(1) loop in the main.c

Projects based on it